FortiSwitch Secure Access switches deliver a Secure, Simple, Scalable Ethernet solution with outstanding security, performance and manageability for threat conscious small to mid-sized businesses, distributed enterprises and branch offices. Tightly integrated into the FortiGate® Network Security Platform, the FortiSwitch Secure Access switches can be managed directly from the familiar FortiGate interface. This single pane of glass management provides complete visibility and control of all users and devices on the network, regardless of how they connect.

Reduces complexity and decreases management cost with network security functions managed through a single console via FortiGate. This integration allows all users to be authenticated against the same user database, regardless of whether they connect to the wired or wireless network, including temporary guest users. In addition, same security policy can apply to a user or device regardless of how or where they connect to the network.

The Power over Ethernet (PoE) capability in some models, enables simple installation of wireless Access Points and IP phones in the network. 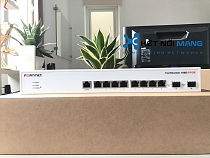